So…my birthday was last week, and I celebrated on Saturday night with an epic theme party (oh how I love a good theme party)! My friend Keri and I planned one of the best parties I’ve ever had! The theme was Prom, and the plan was a scavenger hunt bar crawl. The best part was that we actually had a surprise prom set up at the last bar, complete with decorations, a photo booth, snacks, cake, and spiked punch.

It all began with the invitation…including a picture of me at my Junior Prom (19 years ago!!!). Oh man, I had such a baby face back then!

Next up was planning the scavenger hunt…this was definitely the most fun part of the planning process! We categorized the tasks into photos, videos, things to collect, and drinks to drink. The best part was that all photos and videos had to be uploaded to Instagram throughout the night with the hashtag #keslerprompubcrawl so we could follow the other groups and see what they were up to! 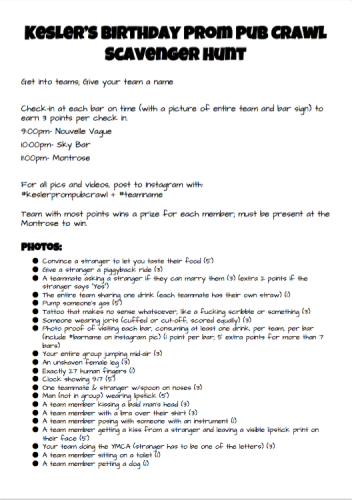 We all met up at one bar, got into teams (we were Team Spice Girls), and began working our way through the scavenger hunt. Along the way, there were checkpoints where we would see our friends/competitors and trash talk one another. Some of my favorite tasks were singing “I’m a Little Teapot” (with motions) in front of a slew of people at a crowded bar, finding a stranger to play Rock, Paper, Scissors (we had to teach him first!), and me convincing a stranger to let me try his food (it was good, by the way).

The Prom party at the end was AMAZING! Not only did it look (almost) like a real prom, but we had hired a DJ to play music that would have been at my prom, so everyone was dancing and singing along to songs like Will Smith’s Getting Jiggy With It, K-Ci & Jojo’s All My Life, and N’Sync’s Bye, Bye, Bye! Everyone had a ball taking selfies and group shots in front of the photo booth display. At the end of the night, we even crowned a Prom King and Queen…and guess who was Prom Queen?!? Yep…you guessed it! It was me! 🙂

Here are a few of my favorite pictures from the night…it was definitely hard to narrow it down to just a few!

35 was definitely one to remember…I had a BLAST! 🙂