Have you ever had an MRI? Until today, I hadn’t either. To be honest, I don’t even know what MRI stands for. All I know is it’s a machine that sees inside your body. And I’ve heard that it can make people freak out. Oh, and I’m pretty sure I’ve seen one on Grey’s Anatomy before.

If you know me, or if you’ve read my blog lately, then you know I’ve had some problems with my back recently (and chronically). When I went in last week, the doctor ordered an MRI to see the extent of the nerve damage on my left side. Today was the day. In honor of my MRI, here’s a firsthand account of what it’s like inside the machine.

When I first arrived, I had to fill out a questionnaire asking me things like illnesses, surgeries, etc. that I’ve had, whether I have any metal inside my body (i.e. pins, plates, pacemaker, etc.), and whether I’ve ever suffered from claustrophobia before. Apparently people get really freaked out inside the MRI machine. Luckily, I’m not afraid of small spaces. 🙂 Following the questionnaire, I was led to a changing room where I had to remove all clothing, jewelry, etc. except for my undies. Wearing only a robe and pink crocs (ugh!), I was then ushered into the MRI room.

The first thing I noticed was the danger sign at the entrance. Pretty sure prolonged exposure to this machine can’t be good for you. Once I entered the room, I realized it was freezing! Not to worry, the nurse said, I’d have a blanket during the scan. The MRI machine looks like a white space ship/tunnel thing. It’s huge and nearly fills up the room! Climbing the stairs, I got up onto the “bed,” which is essentially a narrow table with an area at the end designed to hold your head in place. I laid down, and the nice nurse covered me with a blanket. Due to the apparent noise level I was about to encounter, I was given earplugs. In case of emergency (i.e. a freak out), I was instructed to hold a ball attached to a string. If I got scared or felt like I needed out immediately, I was to push the ball. Now I was ready to go into the space ship.

The MRI would take about 15 minutes I was told. During this time, I was not allowed to move a muscle, otherwise it would mess up the scan. The nurse pushed a button, and I slid slowly backwards until I was completely encased in the white tunnel. Closing my eyes, I listened to the sounds. Boy were they loud! I’m thankful I was given earplugs. I can’t imagine what it would have sounded like without them! At first, it sounded like sirens. You know the ones, where the ambulance tries to get you to move out of the way so they can get by. Following that, it sounded like I was in a club, listening to a trendy new techno jam. There was even a point where the table began to shake. I’m not sure if it was intentional or a byproduct of the loud noises emanating from the machine.

All in all, the experience was not exactly what I expected. I kind of thought I’d be freaked out or that the machine would do some crazy twists and turns with me inside it. It was a bit of a let down. I did get to see the scans of my bones…pretty cool! I’ve got an appointment on Friday to find out the results. Fingers crossed for good news! 🙂

In case you’re interested…here’s a picture of my insides! 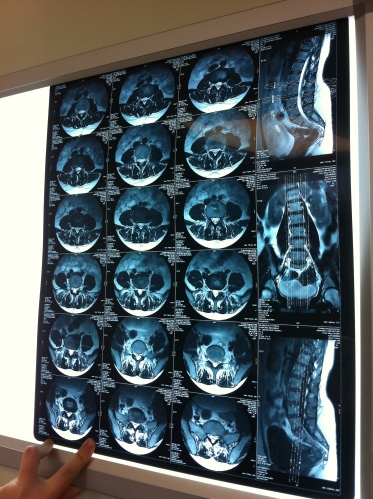