As I was tidying up after my PD workshop this afternoon, I heard voices in the hallway. Knowing everyone had gone home for the evening, I wondered who it could be. Listening closely, I thought I heard Cai’s voice, an adorable second grader who is in the classroom next to my office. Wandering into the hallway, I found Cai reading poems aloud to his mom and little sister.

Cai’s class is in the middle of a writing unit of inquiry focused on poetry, and he was sharing the many poems his classmates had written that were displayed outside of the classroom. I joined Cai and his family, and he read his “I am…” poem to me.

“Cai, would you like to see a poem I recently wrote in my writer’s notebook?” I asked.

“Yes!” he said enthusiastically as he followed me to my room.

I shared my percentage poem with him, and he loved it. He immediately began asking me questions about my writer’s notebook, thumbing through the pages, noticing that I, too, had a heart map, a neighborhood map, and lists. Immediately, he reached into his backpack and proudly showed me his writer’s notebook. We spent the next half hour poring over the entries in his writer’s notebook. He read almost every entry to me, explaining, in great detail, the intricacies of his lists and pictures and sharing the inspiration for his writing. I especially loved his entry about snowflakes. He copied down a poem about snowflakes (well, a song, really) that his little sister’s class performed for the winter concert in December. Then, he wrote real and true information he’d read about snowflakes underneath. To top it off, he decorated it with snowflake stickers. 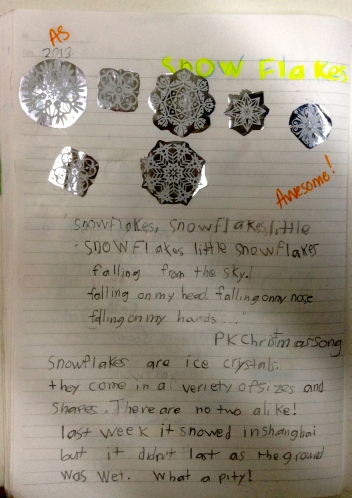 After reading through his lists, I realized that Cai and I actually have quite a lot in common. Like Cai, I, too, hate tofu, cold water, hitting, and some of the smells on the streets of Shanghai. 😉 We both share a love of sushi, writing, the color yellow, and family.

I can’t tell you how happy I was this afternoon. I was right where I needed to be. Cai and I shared a magical moment and bonded over our shared love of writing. Cai is a writer, through and through. He is confident, writes for a purpose, and uses his writer’s notebook as a tool to catch his thinking. And to think, all this from a kid who moved to our school a mere seven months ago speaking no English. Wow…just wow! 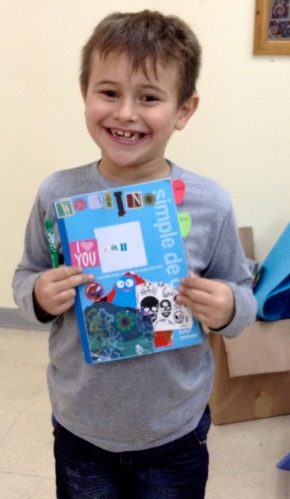 Here’s Cai proudly showing off his writer’s notebook. How cute is this kid?!?

Writing from home, school and travel

Reflections and Aspirations for an Extra-Ordinary Life

Reflections on my life as a teacher, reader, writer.